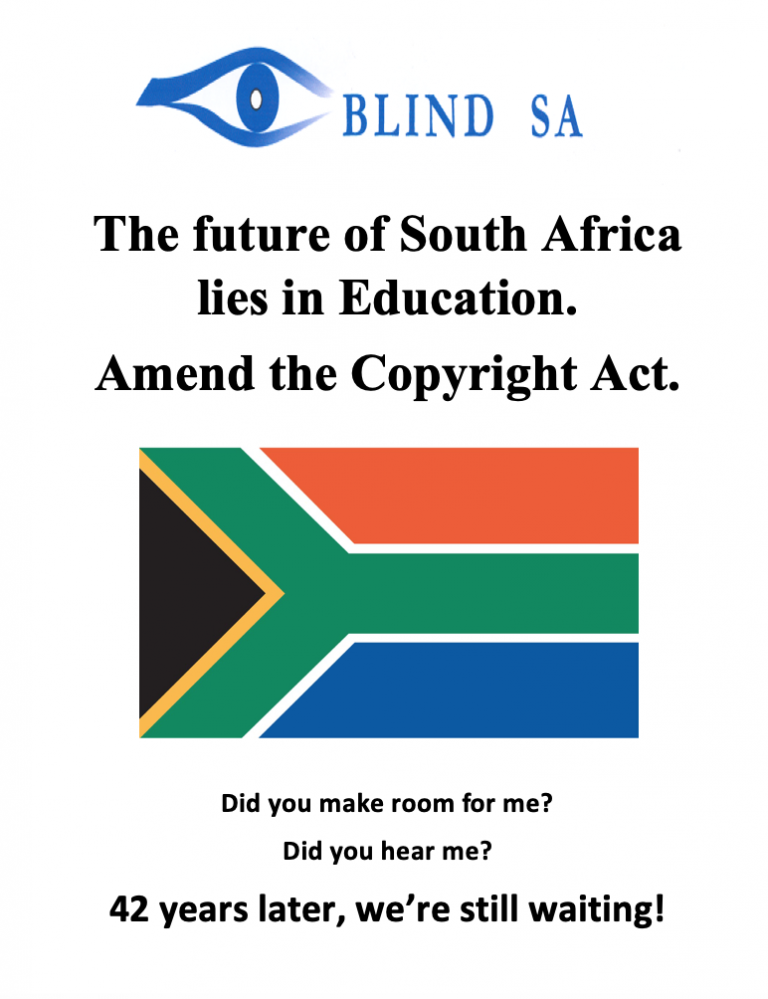 First of all, thank you so much for all your messages of congratulations and appreciation and your kind words. We wish to say that we did not do this to receive accolades or score points, but we did it, because we considered it to be something of vital importance, something about which all of us are passionate. We have been frustrated for many years about the violation of our right of access to publications.

My first involvement happened in 2005 where I did a presentation in the then Port Elizabeth at a conference about creating a culture of reading. Jace has been involved with this matter for longer than he would like to remember and he was directly involved in the Marrakesh Treaty seeing the light of day. André and Ntshavheni have done numerous media interviews. Jace, Ntshavheni and I have done presentations to the Parliamentary Portfolio Committee and we have attended many workshops and conferences. But those really deserving of your praise are Section 27 and Adv Jonathan Burger who offered their services to us for free. I always believed (and it has now been proved) that the legal advice they have given us, was the best possible advice to achieve our goal in the shortest time. The method advocated by Prof Owen Dean of Cape Town would not have had this result and would have led to years of litigation. Likewise the method promoted by another blindness related organisation in a presentation to the Parliamentary Portfolio Committee would not have had this outcome for years and only resulted in confusion among persons not part of the blindness sector, as they could not understand why two organisations for the blind were opposing each other in a matter that is of such vital importance to all blind persons. But it all ended well and we achieved what we have been striving for for so many years.

You may recall that the Copyright Amendment Bill was accepted by Parliament and the National Council of Provinces whereafter it was sent to the President to be signed into law. When a bill is sent to the President, he can do one of two things in terms of the Constitution: he can either sign it and it becomes law, or he can return it to Parliament if he has constitutional reservations for those reservations to be reconsidered. But when the President hadn’t done anything about the bill for 13 months, Blind SA launched an application to the Constitutional Court to compel the President to sign the bill, as 13 months is an unreasonably long time to delay taking any action. On receipt of our application, the President returned the bill to Parliament, raising 6 constitutional concerns he had. At that stage there was nothing more we could do about it, because remitting the bill is one of the two options the President has. One of those concerns, particularly the tagging of the bill, is one that is going to cause adoption of the bill to be delayed for several years to come. So blind people have become collateral: All the warring parties are happy with Section 19.D of the bill which provides the copyright exemptions we need, but the bickering around the bill caused us not to get the provisions of Section 19.D.

Then something interesting happened: The Constitutional Court wrote to our legal team and posed two questions:

In my mind that was a clear indication that the Constitutional Court had sympathy for our matter. However, we responded that the matter was moot, because the President had done what he is constitutionally entitled to do, but we decided to claim our costs on the ground that the President had taken an unreasonably long time to do anything and we got our cost repaid which, I must say, was a substantial amount. Our attorneys, Van Zyl, Ebrahim-Cook  work for Blind SA on a pro bono basis, so they did not charge us anything, but our senior counsel and his junior cost us around R150000. Fortunately we recovered our cost.

Then for many months the Parliamentary Portfolio Committee dragged its feet with the remitted bill and it became clear that this was going to take many years to resolve.

Enter Section 27. We had engaged before with Section 27 in a matter against the Department of Basic Education about the unavailability of braille textbooks. Section 27 now expressed an interest in taking up our copyright matter and brought in Adv Burger. The rest, as they say, is history. Initially the Department of Trade, Industry and Competition was somewhat reluctant. They wanted to settle out of court, but the settlement they offered us, was total nonsense: it amounted to letting the process unfold as it would do without the court case. Of course we rejected the kind offer and instructed our legal team to forge ahead which they did with aplomb. Those of you who could listen to the proceedings, will agree that adv Burger was phenomenal. He was also ably supported by counsels for the three friends of the court, the International Commission of Jurists, Media Monitoring Africa and Recreate. Well done to our legal team and to all who supported us so well. We cannot tell you enough how much we, the blind and partially sighted community, appreciate it.

But the battle continues. Yes, we got the copyright exemptions we wanted, but because there are also blind performers, learners, teachers, lecturers, students, we also need the other benefits provided by the Copyright Amendment Bill that is still being disputed. Blind SA absolutely supports the bill and will continue supporting it. What the other blindness organisation seemed to allege in their presentation to the Portfolio Committee that Blind SA is not interested in the plight of those persons in merely striving for copyright exemptions, is categorically untrue. We prioritised copyright, because that affects every blind person and now that we have that out of the way, we will strive to alleviate the plight of blind performers not receiving the royalties they deserve and the difficulties of access to information by blind and partially sighted learners, students and academics. We need to speak with one voice about these matters and not undermine each other if we want to achieve results and we call on all of you to support us in the process going forward.