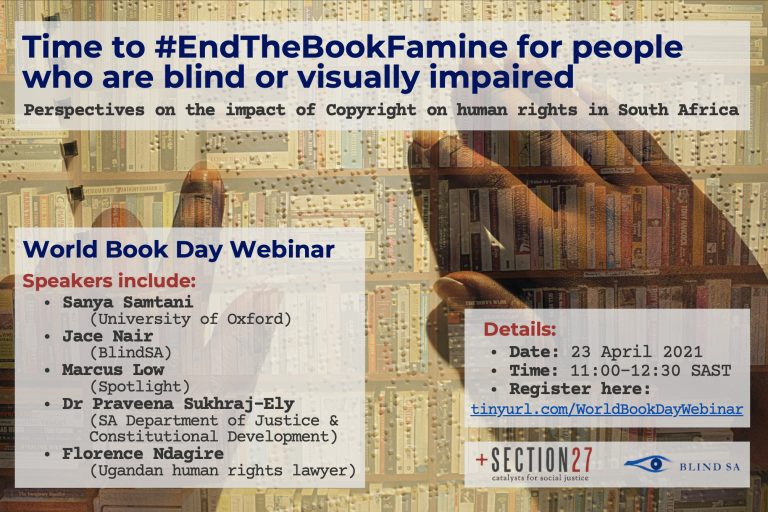 BlindSA and SECTION27 take government to court to #EndTheBookFamine for persons who are blind or visually impaired.

7 April 2021, Johannesburg – BlindSA, represented by SECTION27, has approached the High Court of South Africa (Gauteng Division) to challenge apartheid copyright laws and fight for the human rights of persons who are blind or visually impaired.

The apartheid era Copyright Act of 1978 infringes on the rights of persons with visual disabilities, in particular the rights to equality, dignity, basic and further education, freedom of expression, language and participation in the cultural life of one’s choice. Furthermore, this Act does not align with numerous international commitments like the UN Convention on the Rights of Persons with Disability ratified by South Africa in 2007 or the Marrakesh Treaty to Facilitate Access to Published Works for Persons Who Are Blind, Visually Impaired or Otherwise Print Disabled (2013, not yet ratified).

One of the main problems with the current Act is that it does not provide exceptions to copyrighted materials to allow persons to convert these published works into accessible formats such as braille, Digitally Accessible Information System (Daisy), audio, large print or other suitable formats for persons with visual disability. This has resulted in a Book Famine for persons with visual disabilities, constituting unfair discrimination. Partners including retired Constitutional Court Justice Zac Yacoob and Spotlight editor Marcus Low have provided supporting affidavits as blind persons who have experienced first-hand the barriers to access which the current copyright restrictions in South Africa cause. The impact of copyright on learners with visual disabilities is also severe.

These testimonies are just the tip of the iceberg about why South Africa’s copyright regime needs urgent reform. 27 years into democracy, persons who are blind or visually impaired still face a severe Book Famine, which results in:

Acknowledging some of these problems, government introduced a Copyright Amendment Bill (CAB) to parliament in 2015. The CAB included a new section called 19D – which contained general exceptions regarding protection of copyright works for a person with a disability. This would allow persons who are blind or visually impaired to make or import accessible format copies of published works without the permission of the copyright holder, vastly improving access to reading materials.

Six years later, after huge delays and rounds of public participation, debate and the President returning the Bill to parliament citing so-called constitutional concerns, the fate of the Copyright Amendment Bill remains up in the air.

The process ahead for the CAB is likely to be long, despite that 19D – a clause which has never been contested – could increase access to reading materials for persons who are blind or visually impaired now. 19D is essentially held hostage by a legislative process that is politically contentious, delaying the realisation of human rights for persons with visual disabilities.

We have filed papers arguing that the Minister of Trade, Industry and Competition Ebrahim Patel, Minister of International Relations and Cooperation Dr Naledi Pandor, the Speaker of The National Assembly (Thandi Modise), the Chairperson of The National Council of Provinces (Amos Masondo) and President Cyril Ramaphosa must fulfil their constitutional and international obligations to persons with visual disabilities.

We believe that the court must declare the current Copyright Act unconstitutional. We are calling for a temporary ‘reading in’ (or inclusion) of proposed section 19D into the current Copyright Act with immediate effect, so that persons who are blind or visually impaired can start to benefit from the change as soon as possible while Parliament is still addressing the issue.  If the discriminatory aspects with the Copyright Act which we have highlighted in our papers are not resolved by parliament within a year, we request that the court makes the inclusion of 19D into the current Act permanent. We also demand that government ratify the Marrakesh Treaty. These measures would increase access to reading materials and respect the constitutional rights of persons with visual disabilities.

We cannot wait any longer – we need Copyright reform so that we can all access reading materials and published works in formats suitable to our needs. Government needs to uphold the values of the constitution, and #EndTheBookFamine once and for all!