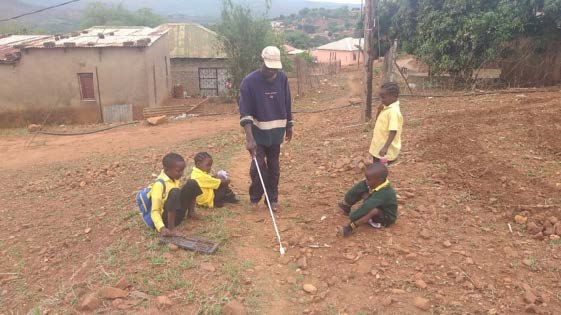 … with help from Blind SA and the Tzaneen municipality

David Malatjie cried the day our Orientation & Mobility Practitioner visited.
It was partly his delight that somebody, finally, was reaching out to help – and partly his shame at having to confess that his humble home couldn’t offer his visitor the use of a toilet. It hasn’t been an easy road for David.

A work accident in 2005 blinded David in his left eye, and he became blind completely in 2010 – and then lost his job. While trying to come to terms with his condition, his wife and son left because there was no more income to meet their needs.

He waited six months to receive a disability grant, with his parents managing to support him financially in the interim. But in 2014 his parents passed on and he was left with no one to look after him.

David has spent most of his life in the mountainous, rocky surrounds of Lepepane village, in the greater Tzaneen municipality. It was here that our O&M Practitioner met and comforted him. David confessed that he was often saddened by the local community who laughed at him and didn’t care to assist him while struggling to find his way.

Our O&M Practitioner reported David’s circumstances to the municipality through the local structure and to the district disability co-ordinator. A site visit would be immediately undertaken with the involvement of a local councillor.

According to the local authorities, David will now be offered alternative accommodation funded by a local budget allocated for such cases.
Additionally, David’s Orientation and Mobility training means he now has the skills of normal daily living and will be able move around independently using his new white cane.