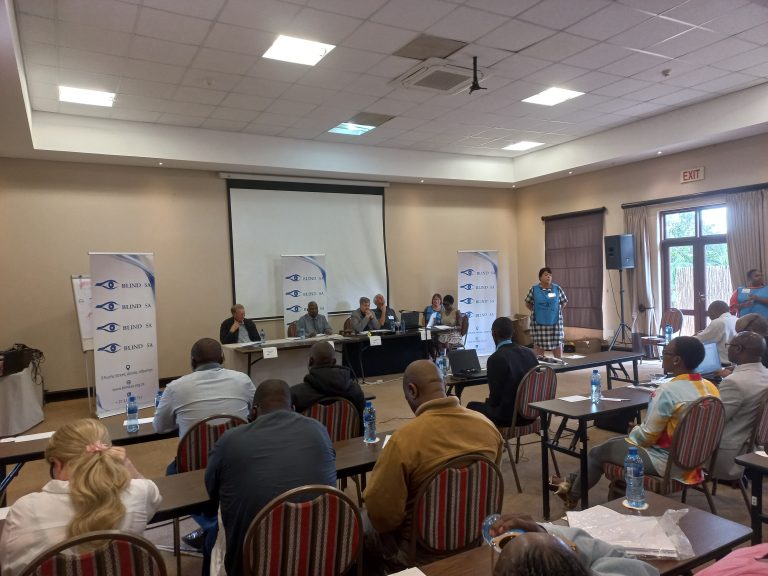 BLIND SA HOSTED the 76TH General Assembly in Whiteriver, Mpumalanga from 19 until 21 October 2022

Blind SA, a National Disabled People’s Organisation (DPO) of the blind and for the blind, with a vision to do whatever is necessary or conducive to empower blind and partially sighted people to become economically self-supporting and to live a full and meaningful life as citizens of South Africa, hosted its 76th General Assembly at the Winkler Premier Hotel in Whiteriver, Mpumalanga. There were seventy-four delegates and support staff from thirty-eight Branches from all nine provinces and the Head Office.

The purpose of this General Assembly was to report back to all Branches on the year’s happenings and come up with resolutions for the next year, while also carving a strategic pathway to help the organization grow.

The General Assembly gives Blind SA as the umbrella organization an opportunity to upskill and empower its member organisations with crucial information and governance guidance so that they can run successful Branches wherever they are. This gathering also gives Branches from around the country the opportunity to report back on their activities and learn from each other.

Friday saw delegates voting for their preferred candidates to represent them on six committees. The voting process this year was very rigorous and thorough in that it even involved the IEC who facilitated the voting process. Delegates used the specially designed Universal Ballot Template (UBT). The candidate lists was printed in braille and large print which provided total accessibility and secrecy. Mr Knox Simelani, Provincial Manager Mpumalanga IEC acknowledged the experience for him and his team which will assist the IEC in future elections in the province.

This year’s General assembly saw the voting in of the new Economic Empowerment Chairperson, Thakhani Masuka who moves from youth. The new Youth Committee Chairperson, Sabelo Hlope was also voted in. A new committee was also established to fully focus on women’s issues with Mpini Letlhage as the Chairperson.

The members listed below were elected to the various committees of Blind SA: